Founded in 1881, Tioga is situated in northern Texas on the joint track of th 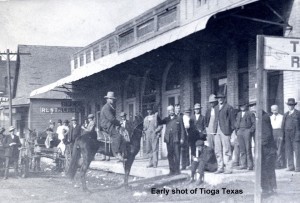 e T. and P. and M.K.T. railroads, 31 miles southwest of Sherman and 6 miles north of Pilot Point.  In 1882, the first building constructed was a grocery store and the first school house was a one-room frame building.  In the early history of Tioga (1883), a man by the name of Vicirey bought the old Dan Hays homestead and moved a blacksmith shop there on the west side of the railroad.  Water became so scarce that Vicirey cleaned out an old well near his shop in order to always have some on hand.  Unfortunately, several people became violently ill after drinking from the well and Vicirey knew this practice should stop immediately.  While no longer used for consumption purposes, Vicirey did start noticing that his water appeared to speed up the healing process after laborers washed their cut or burned hands in the well.

In 1884, Vicirey sold the blacksmith shop to Mat Raines, who also came to believe the water from this well had special healing qualities.  News of this discovery quickly spread throughout the region and people came from all over to use the water in their treatment of conditions such as rheumatism, stomach trouble and kidney ailments.  This well became the first of the later famous “Mineral Wells of Tioga”  and was known as “Number One” or “The Old Original”.  The second mineral well was dug by Raines and his brother, “Wash” Raines.  It was actually stronger in mineral values than “Number One” and was known as “Number 86”.  The first mineral water sold was in a six-month package of water rights to residents at a cost of $5.00.  This well water was also sold to transients at a cost of $1.00 per week.  Because of these wells, Tioga was now considered a “boom town” (a town realizing rapid growth), with City leaders and entrepreneurs all seeking ways to profit from this growth.

In 1888, the Tioga Mineral Wells Company was formed.  This company was chartered with a capital stock of $60,000.00 shares at the par value of $1.00 each.  Their holdings consisted of twelve and one-half acres of land that housed seven wells and one large bottling plant.  The plant had a pavilion and bath houses for men and women, complete with modern appliances used to provide hot, cold, shower, sweat, Turkish and mud baths to its patrons.   By 1902, the population of Tioga had grown to approximately 1,200 residents and the company opened branch offices in both Chicago and St. Louis.  Tioga was incorporated in 1906 and the Aldermanic form of city government was adopted.  The City’s assessed value was in excess of $300,000.00 and the tax rate was sixty-five cents.  At this point, Tioga had one high school and one grade school.

In 1932, the paving of the state highway aided in the opening of several businesses.  By 1936 there were eight grocery stores, four garages, two hotels, two cafes, two barber shops, two beauty parlors, a dry goods store, a repair shop, a blacksmith shop, a tailor shop and an ice cream house.  Tioga has many old, aristocratic families families and is proud to list among her native sons State Senator Olen R. VanZandt and Gene Autry, the famous western screen and radio star.  Mr. Autry was educated in the Tioga school system and worked on the railroad, using the telegraph key.  Many of his ancestors are buried west of Tioga in the Indian Creek Cemetery.

With the opening of Lake Ray Roberts in 1989, Tioga is enjoying renewed business activity.  There are several excellent facilities in the area for fishing, hunting and other forms of outdoor recreation in the area.  The 2012-13 school year brought a high school back to Tioga, beginning with a freshman class for the first year and then introducing a new grade classification each subsequent year until becoming a four-year campus in 2015-16.

** Tioga is an Indian name (from a tribe originating in New York, N.Y.) and means “swift current” or “rushing waters”.